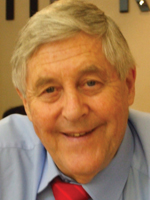 Tony Heard, a former editor of the Cape Times, was awarded the Golden Pen of Freedom by the World Association of Newspapers and the Pringle Medal after his full-page interview with then banned ANC leader in exile Oliver Tambo in November 1985. For his open defiance of censorship , Heard was arrested in his office under apartheid security laws and later dismissed as editor of the broadsheet.

Heard would go on to cross the line from journalism to special adviser in the Presidency of Thabo Mbeki. Decades later, he has penned a highly personal account of working in the government from 1994, first as adviser to Minister Kader Asmal, then spending a decade in the Presidency, and a dozen years elsewhere in government advising and speech-writing up to 2016.

Heard will speak to the Cape Town Press Club about his experience from the inside of government during the first decades of our democracy. 8000 Days: Mandela, Mbeki and Beyond is the fascinating, little-heard, inside story of a former journalist in the corridors of power. He will share his thoughts on South Africa’s future under Cyril Ramaphosa after the Zuma years, and he will take questions.