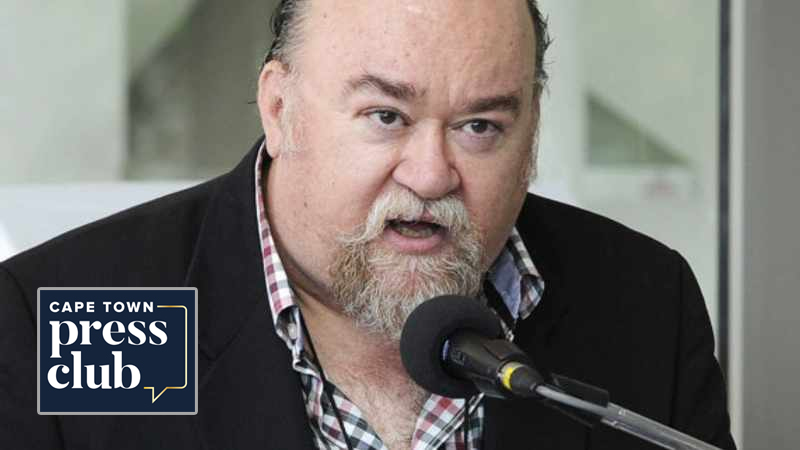 Donwald Pressly, long-time chairperson of the Cape Town Press Club, died in the early hours of Thursday morning after a long illness. He was 59.

Donwald Pressly, long-time chairperson of the Cape Town Press Club, died in the early hours of Thursday morning after a long illness. He was 59.

Prominent among things he will be remembered for will be keeping the Cape Town Press Club alive in the decades when so many South African institutions were corrupted and destroyed. Without Donwald, it would almost certainly have happened to the Press Club too.

After graduating from Rhodes University’s Journalism Department, Donwald dedicated his life to South African journalism. Donwald’s other public passion was for liberal values, which he usually, but not always, saw in the Democratic Alliance.

His notion of public morality and journalistic responsibility got him into notable trouble with media bosses exerting political pressure and even political bedfellows he believed took the wrong path.

He was fired from a newspaper on the excuse that he had allowed his name to go forward for a seat in Parliament. And later he got into a battle with the DA when he thought they were deviating from their values.

Nothing typifies Donwald’s sardonic sense of humour and determination not to be misled better than his last conversation with a Press Club committee member days before he died.

“I’ll be going to Anglican Heaven soon,” said Donwald, the son of Kimberley’s late Anglican Canon George Pressly, from his bed at home. Like the dedicated reporter he was, he wanted the truth without sugar-coating. He did not want to be told things were better than they were.

At one time known as chairman of everything, including the Parliamentary Press Gallery, the Cape Town Club, and the Cape Town Press Club –  perhaps his most enduring institutional commitment. In an era where so many South African institutions were corrupted or died, the Press Club’s survival is thanks in no small part to Donwald. He remained a committee member till the end.

Colleagues remembered his generous support for inexperienced colleagues. “The media at that point was dominated by the press, mostly male reporters. There was a great deal of swagger and ego in the Parliamentary press gallery, but Donwald was different,” said Marion Edmunds.

“He did not elevate himself above others. He didn’t try to be a rock star. I can’t remember him ever putting somebody down or scoring points off others. He wasn’t there for the ego or the glamour or the fat pay-check, he was there for the news.

“Like many other journalists of the last few decades, he was cast into the journalistic wilderness from time to time and had to scratch around to find employment outside the big titles.  Sometimes I met up with him when I too was in No-Man’s Land, and I admired his fortitude and resilience. He never gave up on the profession, even when those who controlled elements of the media treated him unfairly and in some instances, with cruelty”.

“His dedication to his profession was remarkable; he was principled and liberal in his views. He was a dear friend to many and was always open to engagement, he listened, applying his shrewd political sense to conversations, viewing the many characters who have met him over the years with a curious and uncompromising gaze.”

The Committee and members of the Cape Town Press Club mourn the passing of Donwald Pressly and join his many friends, family and colleagues in sending our deepest condolences to his beloved and devoted wife, Jean-Marie.