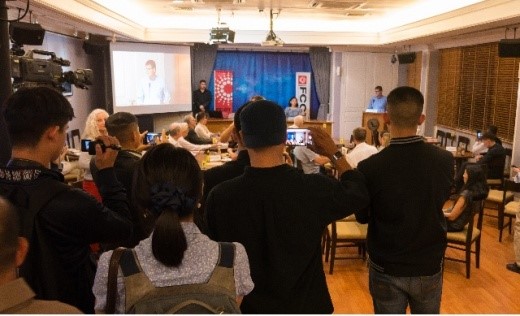 The Cape Town Press Club stands in solidarity with the Foreign Correspondents’ Club of Thailand after Thailand police shut down a panel discussion on the bogus grounds that the event was endangering national security. Plainclothes security police photographed attendees and panelists before they shut down the event. The event in Bangkok was to discuss recent developments in Myanmar.

It is apparently the sixth such event the country’s ruling military junta has shut down since seizing power in May 2014.

In June 2015,  the junta shut down another event by the Foreign Correspondents’ Club of Thailand (FCCT) to discuss the country’s lѐse majesté law, which allows for 15-year prison terms for public criticism of the Thai royal family.

According to a statement from the club, police had warned that the planned discussion: “Will Myanmar’s Generals Ever Face Justice for International Crimes” could have been used by “third parties” to cause unrest and endanger national security.

The FCCT says that there are “no grounds whatsoever for such suspicions” and that Thai authorities have “overreacted” in shutting down the event.

The Cape Town Press Club calls on the Thai authorities to allow journalists in the region to do their work without fear of harassment or reprisal.

The FCCT must be allowed to resume its vital role as an open and free forum for discussion and debate on regional matters. That is what press clubs do.